Because Robert Halfon got so close to being Harlow’s MP at the last general election, and because Harlow is important to the national Conservative party, we often get Shadow Ministers and senior members of the Party visiting Harlow. 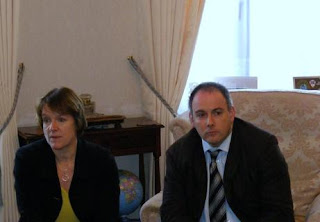 I love it when they do, especially since we took control of the council, as we get to showcase what is good about Harlow, and how we are changing the town.

But we didn’t just listen to her; Caroline took the chance to have a lunchtime discussion with Conservative Councillors and then went on to visit a Crucial Crew session and to meet with the anti-social behavioural team.

Mrs Spelman was so impressed with improvements in the last year, that she said would seek to replicate the work of Harlow Council’s anti-social behaviour team in her own area in Birmingham.

Robert Halfon who accompanied her for the day told me afterwards “I was pleased that Caroline visited Crucial Crew and the anti-social behaviour team. The work this team does for Harlow is ground-breaking and is having a significant effect on reducing anti-social behaviour.”

Overall a really good visit. Next one we have is Eric Pickles the Party Chairman on Friday.