When we took control of the Administration of Harlow Council and Installed our first Chairman, one of the first things he did was appoint Rev Martin Harris, the Team Rector of St Paul’s Parish in the Town Centre, as the Council’s chaplain, to aid Councillors by being there to provide a Christian ethical and moral outlook.

I have to say that one of the pleasurable things about being Leader of the Council, is to meet up with Martin, about once a quarter, for a coffee or lunch but mainly just to chat about how things are going. Martin gives me a unique perspective on what is happening in the town and will often lobby (gently) for the things that the Christian community of the town feel are important. The conversation often ranges much further afield and this weekend he is able to share some information about how the recession may be hitting the over 50’s in Harlow particularly worse than others.

It’s also a good chance for me to catch up on some other projects, like the Street Pastors that have been such a success.

I think in the past in Harlow the Church and Council have hardly spoken. With the now Yearly civic service that we reintroduced and regular meetings with Martin, as well as a VERY active Workplace Chaplain in Robert Findlay I am proud to say that the link is being restored.

Praise in the Park 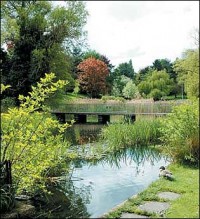 This afternoon was Harlow’s very first “Praise in the Park”

A gathering of 32 churches from across the town and nearby area, getting together in our lovely town park to worship together.

I was very privileged to be asked to come along and read the Gospel at the event.

There were about 600 people who attended, which I think for a first stab at an event such as this was really good. Lets hope next year the event can be bigger and better.

It was wonderful to be part of such a heartwarming event, and its at times like this that I really do think God has some good things in store for Harlow.

It was also very humbling to be singled out as Leader of the Council and prayed for directly.

The new opposition Chairman of the Scrutiny Committee, called an informal briefing for his new committee members and anyone interested, last night. He asked me as Leader of the Council to come along and give people my view of scrutiny and what I thought it should be doing as a committee.

Firstly I was glad it was an informal meeting, I brought Mrs Johnson (the other Cllr Johnson) and my four year old daughter with me. My daughter is very used to the idea of daddy going to meetings but rarely goes with me, so sitting in the corner of the room colouring in whilst daddy spoke to the committee was a bit of a treat for her, and it meant we were able to pop into the briefing whilst not totally disrupting a family night!

I spoke for about 10 minutes and outlined a number of things:

First I didn’t like the premise of the briefing “how to make scrutiny work” as I felt that implied that it had not worked previously, when I think there are a number of scrutiny reviews that were very successful in recent past – take the flooding review for one.

Second that it was not for me to tell scrutiny what to do, as it was more their job to challenge me and the work of the administration. We publish forward work plans for our committees and working groups showing the plans for the year and if scrutiny want to pre scrutinise some of these issues that is for them to choose.

Third we do not always have be adversarial. The scrutiny committee should act like a select committee in Parliament offering advice on upcoming bills etc and suggesting useful changes.

Fourth that the committee has powers to look at issues outside of the council, such as health and education of Harlow.

And finally that they should be realistic in their objectives – remembering that they are one committee in a small district council.

Scrutiny is an important part of local government and if run well by all parties involved can make a valuable contribution to the running of a town.

I left the briefing session with the thought that perhaps the rest of the evening should have a slightly different title to the one published, “How to make Scrutiny work better“