Cllr Lee Dangerfield has just breifed me on some of the happenings at a meeting with South Anglia Housing, on the Berecroft estate.

Apparently SAH have now given a commitment to:

Install CCTV on the estate to combat anti social behaviour, as requested by the residents.
Improve the hardstanding areas of the estate
Continue the process of removing and replacing guttering

They haven’t yet given a commitment to work on the garage improvements.

Overall some really good news for the people who live in Berecroft.

Well done to Cllr Dangerfield for helping get this stuff done!

So, it’s Mothers Day and that means a rest right? A chance to visit with and spend time relaxing in the comfort of your dear mother…. and no politics right? 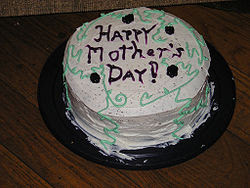 The morning started well enough, getting up with the 2 year old daughter, to give Mrs J (the other Councillor Johnson) a lie in as befits the day and her station in our household. Then onto both sets of Parents to see our respective mothers, and shower them with gifts and attention. Easy right? No Politics can creep in there right?

and so on and so forth.

Because even a day off is never really what it seems to be…..

Still – all three mothers (mum, mother-in-law and wife) liked their presents and cards, so brownie points there!

Last night I spent an enjoyable evening with a large group of friends.

No we were not down the pub, or having dinner, but we did have a lot of fun.

We spent the time knocking on doors in the Staple Tye ward, which will shortly be having a by-election. We were making people aware of the election, and finding out how they were going to vote. It was also a great chance to get feedback from them on the first 10 months of a Conservative Council in Harlow, and a feel for what people thought nationally of Gordon Brown and his government.

I’ll be honest, not everyone liked the things that the new Conservative Council were doing, but those who didn’t understand why we had to do them. The people of the town clearly understand the poor financial position we inherited from the Liberal/Labour led council, and that we were having to make difficult decisions.

One woman I spoke with, alongside Cllr Sarah Dangerfield, was impressed that we didn’t try to spin or gloss over the problems, and that I was upfront and told the truth, even if she wasn’t going to like it.

Wouldn’t it be nice if other political parties fighting the by-election were willing to be equally honest?

The thing that most impressed me was how well known and liked Cllr Lee Dangerfield, the current Staple Tye Conservative councillor, was by the people we met; and how well known our candidate Lorraine Caldarella was! She has obviously been doing a lot of work!

My thanks to the many people, who were out helping last night, and have been helping every night already. If you want to come out and join us, have a good laugh with the team and help win the Staple Tye ward for the Conservative Party, then drop me a message.