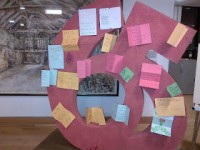 65 years ago today Harlow was formally designated a new town, as part of the government’s scheme to relieve overcrowding in post war London.

Celebrations kicked off in the Gibberd Gallery (which for those who don’t know, is the largest free entry gallery space in Essex) on friday evening, with the creation of a large “65” sculpture and dramtic performances from Livewire.

Today in the town park, along with the Sport Relief run, there were donkey rides and birthday cake (cut by the Council Chairman Mike Garnett) and generally fun for all. We also gave out maps of some of the more interesting features in Halrlow, like the bench where a soviet agent was caught handing over classified material during the cold war, or the details of the first ever residential tower block. Lots happened in historic Harlow.

And lots is happening in modern Harlow too! We may be feeling the age a bit, but underneath, the town in raring to go for the next 65 years!