With Super Tuesday approaching I thought that I should give my views on the republican race. – don’t think Mitt Romney has it in the bag as much as many othero. If he fails to win big on Tuesday then I really think the republicans could be facing a brokered convention. If that was the case who could win?

Step forward a man with a record of low taxes and getting things done – and a name to scare the american left – Jeb Bush! 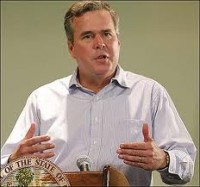