Palin takes one more step… but is it on the road to President or Kingmaker? 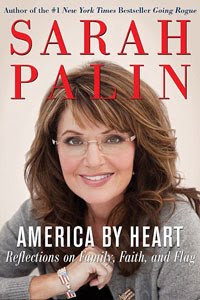 I spotted this earlier on this evening, and was struck by how much it chimed a chord with me. I am not an American obviously but I am a patriot to my own country and recognise a number of the themes that Sarah talks about.

Britain and America have an awful lot in common, and Britain is under assault more than ever these days too. As a Conservative I also believe that my country, indeed all countries are better when government is limited, markets free, and families strong.

There is now no doubt that Sarah Palin is pitching for the Presidential Nomination, but my real question is, does she have a back up plan?

I think she does. I think Sarah is pitching herself as the natural leader of the right in America, regardless of getting the nomination, and no matter what, I think she will have a strong voting block at the Republican National Convention; If that is the case she will be in a position to legitimately weigh in behind the eventual winner, who will then owe her big time.

This book is just one more step upon the road…..but is it the Road to Kingmaker or King?