How do you sell a Fibreglass Sheep? 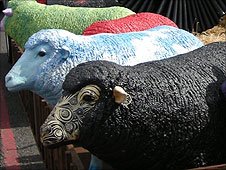 You may have seen the Sheep Trail around Harlow this Summer and Autumn, noted on the BBC here.

Last night, at the Civic Dinner of Cllr Sue Livings, the Chairman of Harlow Council, we were trying to raise as much money as possible for her chosen charities, The Laughter Specialists  and Razed Roof.

Halfway through dinner, the Chairman leaned across to me and told me that one of the sheep had been donated to her for her charities and would I be kind enough to auction it for them…..

How many sheep jokes can you think of over dessert?

I managed a few and we raised £120 for the charities form that auction alone!