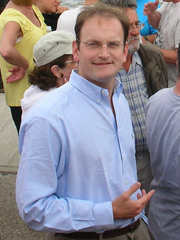 The more I read his blog and see him in action, the more I am becoming a big fan of Douglas Carswell. That is even more so the case today!

On Monday I blogged about this, disgusted that anyone could think about spending more money on our EU membership, despite the government preparing to make serious cuts in many other budgets.

What has been Douglas’ reaction to this? He has moved an amendment to the Bill in the House of Commons tonight, suggesting that perhaps after all we would rather not spend this cash on the EU and maybe keep it at home. According to Douglas’ blog, not all Conservative MPs are supportive of either his amendment nor the fact that they might have to stay late in the commons (10pm) to debate it.

Douglas’ “partner in crime” Dan Hannan has pointed out that the EU wants this money to spend on Europol, expand the EU diplomatic service, and fund THREE financial regulatory services that will be a disbenefit to London’s financial centre. Ridiculous spend in my view at this moment in time.

I seriously hope the amendment is voted on and passed!

As of 15:30 I note that 35 MPs have signed up to Mr Carswell’s amendment, the list can be found on ConHome here.  I am very pleased to see that Harlow’s MP Rob Halfon has signed up. Rob of course was a staunch supporter of a referendum on the European Constitution Lisbon Treaty!