by Andrew Johnson ⋅ Leave a Comment
Noise nuisance is often very upsetting to people and it occasionally makes an appearance in councillors mail bags as an issue raised by constituents, although it tends to be a seasonal thing, come summer and people throw open their windows and crank up the stereo. 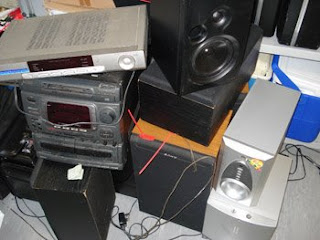 I think we might all have played music loudly at one point or another in our lives and in the most part if you are having a party or a couple of songs on a summer afternoon then most neighbours wont be too bothered, and if they ask you to turn the music down then most people tend to realise that it might have bee a “bit too loud” and gladly lower the volume.
However it’s a bit different if your neighbour keeps playing on and on, even ignoring Council Environmental Health Officers and prosecutions…. As was the case of Mr William Jordan recently.
Mr Jordan, a Harlow Council tenant whose music “caused misery” for neighbours, had his audio equipment confiscated and was also fined £565 when his case came before Harlow Magistrates’ Court a couple of weeks ago.

When officers attended just before midnight one night last year they witnessed him in breach of the second noise abatement notice, playing music so loudly that it was stopping neighbours sleeping.
So in November a warrant was granted by magistrates to seize Mr Jordan’s stereo and other audio equipment. The following day Harlow Council officers were accompanied by Police to the property and confiscated the audio equipment including a stereo, sub woofer and loud speakers, and the Council commenced legal proceedings for the offence.
I am determined that Harlow Council takes issues that matter to residents, like noise and litter nuisance seriously and will prosecute where people are making their neighbour’s lives a misery. We all have to have a responsibility to make Harlow a better place to live.
Well done to the Environmental Health and Legal Officers for their work on this!
If you are plagued with noise nuisance in Harlow you can report it by contacting 446111 or email contact@harlow.gov.uk.
Posted in: Noise ⋅ Tagged: Council Environmental Health Officers, Environmental Health, Harlow Council, Harlow Magistrates Court, Jordan, Legal Officers, Mr Jordan, Mr William Jordan