Now I have been pretty interested in these, as a Councillor for the area, and so have a number of my constituents.

But I have kept quiet about it at home as Mrs J (the other Councillor Johnson) sits on the Planning Committee and I would not want to prejudice her in anyway, or bait her into forming an opinion before the meeting (yes the laws on planning are that stupid!)

In the meantime I have told a number of people how they can find out more, explained the details as I knew them to others and told people who wanted to object how to do so. I also got a phone call from a gent who wanted to support the application on environmental grounds but didn’t want his name used in case his “neighbours found out” 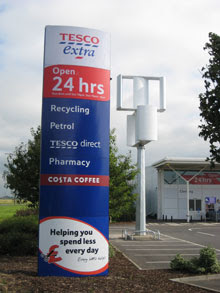 There has been some confusion about these micro wind turbines, with a number of people I spoke to thinking that Tesco were trying to install huge 3 bladed propellers, which is not the case. I have attached an article here on them, (and have added a photo so you can see what they look like) and whilst it needs to be noted that the article is by the people who are working with Tesco and so are probably biased, they are certainly not what I thought of when someone said wind turbine either!

They are about 10 metres tall, which is the size of most lampposts and apparently produce little or no noise. Another Council, whose local Tesco has installed them claims you can stand next to them and not hear anything.

I think its admirable that a major retailer wants to do something about its carbon footprint, and I hope this is not just for show but really is about changing the way they operate. I would love it if more people and businesses in Harlow wanted to do more for the environment. But I think if they do they need to spend more time telling people about it before they do it.

Tesco’s as far as I can tell undertook no publicity of this with their shoppers and neighbours during the planning process. The council did its statutory bit (advertising in papers, putting signs on lampposts and writing to those in very close proximity) but still got blamed for not consulting widely enough – even though we were not the applicants. I wonder if there isn’t some way to pass the cost of increased consultation to the applicants in cases like this?